Last night in Manchester just before dusk, around 4pm people starting gathering at City Hall based on a call to action on Facebook regarding Trump’s recently declared win of the presidency. The event started at 4pm and lasted until between 8 and 8:30.

Organized by MC Auger, an 18 year old college student at NHTI and a few of her friends, the event grew way beyond what they had imagined, ” I was one of the ones who initially created it.  I just kind of decided that something needed to be done and I just put something up on Facebook and I invited a couple of my friends and I never expected in a million years that it would get half of the traction that it did. 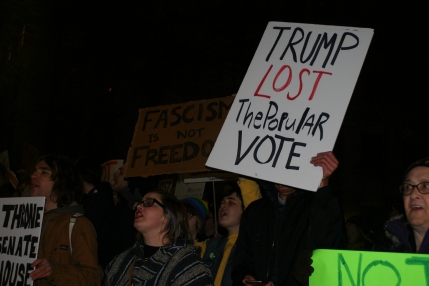 When asked if she’d been involved in politics before, “Well my entire family is made up of people who are Republicans and heavily support Donald Trump and I was frustrated with the results of the election, I guess I felt I had to do something about it in order to feel better.

“I was raised in Catholic school for all of my life and I gradually didn’t like what I was hearing both in school and at home and decided to do my research and found out that there’s more than one way to tackle an issue.

“In the past I was very involved in politics because my parents would take me to big campaign rallies and bring me along to meet candidates or something.  But I’ve never done anything like this before.  I definitely think I’m going to get more involved in politics than I already am, probably I would do something like this again, most likely before Donald Trump is inaugurated.”

Danny Keating, organizer for Socialist Alternative and one of the marshals for the event said that although there was no real trouble, there were some tense moments, “The event started out with people on both sides of the street [Elm Street] chanting with each other.  When we marched down to Veteran’s Park and then came back most of the people went to the other [City Hall] side.  I tried to get everyone over to that side of the street.  There were some counter-protesters, one with Nazi symbol neck tattoos on the other side still with about a hundred or so protesters.

“Some of the protesters started to gather around the four or five or so counter-protesters and they argued with them and chanted at them.  Me and about four other marshals came over and stood between the two groups and then gradually most of the people moved to the other side of the street.  We stayed over there and formed a mini-circle around the counter-protesters for about a half hour.

“Then again a Trump supporter came over to the other side [City Hall side] and started trying to argue with the people and a cop came up and basically said to him, ‘Ok you had your say, move on.’ and he moved on.  That was about it.”

Danny said he got involved on his own, “I saw the event page and saw a lot of threatening on that page, I didn’t know the two young woman that were organizing it but I said, ‘Hey you guys should have some marshals for protection.’ and at first they said, No we’ll be fine’ but then some people who had done events in Manchester before, like the Black Lives Matter folks said, ‘No, we’d like them to be there.’

I asked Danny to explain what a marshal does, “Essentially its security and de-escalation; you are protecting the crowd. Our focus is to look all around the rally and find potential threats; we form a barrier between the two.  Most people go along and it works out very well.”

Another marshal, Julizabeth Gonzalez said what struck her most about the night “For me it was people coming up and saying ‘How dare you think its ok to get an abortion.” They were just saying stuff that didn’t make any sense and the people I was with were just women drinking coffee and weren’t saying anything, it was ridiculous.  Everyone else though was really friendly, a lot of support and a lot of love.”

As for what spurned Gonzalez to get involved, “For me because I’m Spanish and I’m part of the LBGTQ community, for everything after the election because I have felt really uncomfortable and we don’t feel very safe and welcome anymore, so it was nice to be out yesterday and be out there and be embraced by the community and people letting you know you are going to be ok. 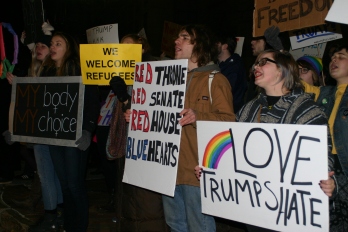 “I feel that since the election people have been more rude to me, staring at me making comments right to me, saying like, “Are you legal?”  I always give them a look and say ‘Pretty much, I came from Massachusetts; I didn’t need a green card.

“I know that a lot of the counter-protesters are missing the whole fact, its about also what the election stands for after the fact.  I did think it was hilarious that there was only a handful of counter-protesters and they were so angry and I wanted to walk over to them and tell them that’s how it feels to be minority in this country, but they didn’t see it like that, but its funny because that must have been how they were feeling, but they didn’t see it like that.

“We also had safety pins, it started in the UK, it was started to signify you are safe around this person, if you are refugee, or gay, or feeling harassed, those people are safe to be around.  One of the marshals had a bunch of safety pins and was handing them out to people who agreed to be ‘safe people’.”

Olivia Rose, 19 worked with the organizers during the planning stages, “I’m not one of the creators [of the event] but I helped with organizing things such as police being there and like part of leading the chants and stuff and making sure that everything and everyone was safe.

Participant showing her “I am safe” designating her as a safe person to go to if someone feels uncomfortable or harassed.

I really like protesting.  I’ve been to two Black Lives Matters protests before here in Manchester.  I work at a grocery store part-time and I work at Old Navy part-time as holiday help.  I’m saving up money for that and school and everything costs so much money.  Wow, nobody told me it would be like this.  I really want to go to school for special effects and theater.

Asked what got her to get involved, “Well Trump, so I was watching his campaign and he just seems have a lot of hate and when I saw him talking about conversion therapy it just hit a nerve and I don’t want a country filled with hate.  I feel like we’re not all together and I feel like it should be.”

As the actual vote counts continued to roll in long after the mainstream media had declared Trump the winner and Clinton had made her official concession speech, it appeared that Clinton did in fact dominate the popular vote by a small margin.  Considering the divisive nature of Trump’s positions and campaign that was enough for many people to hit the streets and demand that the electoral college switch their pro-Trump positions and put in a vote for the candidate that actually won the popular vote.

“To give you an example; there’s the ‘faithless vote’ which is when somebody votes against their pledge, there’s a woman in DC that did not vote at all in 2000, she was protesting the voter discrimination in DC, Barbara Lett-Simmons.  There’s some folks in the electoral college that already pledged not to vote for their pledged candidate.  There’s a many in Texas who has said he will be a ‘faithless voter’ because of Trump’s stance on immigration.

“Many Republicans are saying that electoral college voters cannot change their vote, but its unconstitutional to be prevented from changing their votes, although throughout history there’s never been any prosecution of faceless voters. 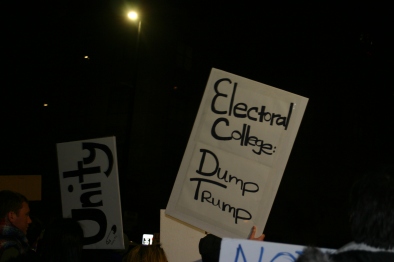 “Additionally I think that people need to understand that this isn’t something that doesn’t happen.  Even up to 2015 there’s been an estimated 157 instances of faceless voters through the history of the country.  This is what the American people want, this is the idea; the electoral college has an obligation to look at the public voting and see who the American people want and the vote says they want Clinton over Trump.

“People need to think of why the gap between the election night and the time of the inauguration, it isn’t just what about counting the last of the votes, its about giving the electoral college the chance to look at all the information and make an informed decision.” 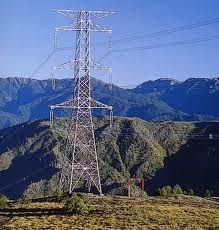 s reported below by a writer to of a letter to the editor, the Chambers of Commerce of the two largest cities in New Hampshire have come out in support of Northern Pass.  Even though its commonly known that not one town or city in New Hampshire will benefit from the raping of the White Mountains, clueless lackeys to the power companies vote their own interests above those of the community.

Manchester and Nashua CofC endorsements: Wave as the power goes by your cities
December 5, 2012
Nashua Telegraph
Chambers criticized over Northern Pass
Letter to the Editor
Two southern New Hampshire chambers of commerce have endorsed the proposed Northern Pass project, disregarding the protests of their fellow residents to the north, where the project would be most visible and have enormous environmental and economic consequences.
The Manchester and Nashua chambers have endorsed Northern Pass because they are enthusiastic about lower electricity rates for businesses, and green and renewable electricity. They, unfortunately, listened to Public Service of New Hampshire’s marketing claims, which are pure fantasy.
Any cost benefit from Northern Pass only would go to ratepayers outside New Hampshire that get their power from the regional electric markets. In New Hampshire, PSNH customers would see little benefit because their energy rates are tied to propping up PSNH’s inefficient coal- and oil-fired power plants.
Is Northern Pass green, renewable energy? Northern Pass electricity would be provided primarily from industrial hydro-electricity in northern Quebec. No environmental agency inside or outside of New Hampshire endorses large hydro as green or renewable.
The purported 1,200 jobs PSNH promised? That claim was debunked in a report by the New England Power Generators Association.
So why have these two chambers been so willing to throw the residents and businesses of the North Country under the bus by endorsing a project that disproportionately would harm the north so that those in the southern tier would reap these bogus benefits?
Could it have anything to do with how many PSNH top executives sit on their boards?
Julie Moran
Tagged chamber of commerce, corporate power, Hydro-Quebec, manchester, nashua, New Hampshire, new hamsphire, northern pass, PSNH