Republican House Representative of Northwood, Kyle Tasker, otherwise known as “Two Gun Tasker” has found himself on the receiving end of the law rather than the making end.

According to a story in the Union Leader, Tasker was arrested in an internet sting arranged based on reports of him harassing a young girl online.   Police did the typical perv-lure of pretending to be a child, in this case a 14 year old girl, interested in meeting up with him for sex.  Tasker fell for the bait and instead of finding the hoped for target of his perversion he found himself in the hands of the law.

In addition, following his arrest, officials searched Tasker’s house and found a large quantity of illegal drugs including marijuana, mushrooms and the narcotic addiction control drug, Sedoxone and an arsenal of weaponry.  Tasker, true to form, also had a loaded weapon on his person when arrested.

Of course Tasker’s colorful career as part of the Republican libertarian Bill O’Brien Gang of Fools is over.  House Speaker Jasper had immediately called for his resignation and finally Jennifer Horn has come out to condemn him as well.

Tasker gained his nickname “Two  Gun” after he dropped a loaded handgun from his body holster onto the floor of the house during session.  He mentioned later that he not only carries one gun on his person at all times, but two.  Just in case.

Tasker also gained national notoriety for his comments on Twitter during a protracted debate that lasted days on the house floor over a Domestic Violence funding bill that house Republicans were holding up on political grounds.

Since birds of a feather flock together, Tasker also found friendship among many among the libertarian far-crank branch known as Free Keene.  Most have lobbied hard for the legalization of marijuana and Tasker was noted to be joining them once in a committee hearing on the issue, trying his best to make a cutting edge point by using an electronic hookah to imitate smoking pot during the hearing.

Also, just a last interesting note.  Tasker somehow got himself placed on the Committee on Children and Family Law this year where he was serving when he got arrested while attempting to meet a child for sex and  Tasker was serving on the Criminal Justice and Public Safety Committee when he dropped the loaded gun on the house floor!

h/t to susanthe bruce who also notes: “In the UL comment section, Rep. Felonious Max Abramson, (R-FreeState) is castigating the police for setting up a sting. Apparently poor young Kyle was POWERLESS in this situation.  The police forced him to try to solicit sex with a child. He had no choice.”

NH.com has posted that Vermin Supreme, the intrepid candidate from Rockport, Mass who promises free toothbrushes, dental floss and a pink pony to everyone has switched over to the Libertarians from his long-time running with the Democrats.

We think he’ll find himself right at home with the Libertarians who themselves seems by their very existence to make a mockery out of the political process.

The internet exploded last night with news that Presidential candidate Hillary Clinton’s husband, former president Bill Clinton entered four polling places in areas around Boston. People on facebook complained that they were cordoned off and kept from voting as the royal procession of Clinton, Boston Mayor Marty Walsh their assorted security entourage were given way into the polling places.

Major news outlets have hounded the Secretary of State’s office with questions about how they interpret Clinton’s behavior or intentions. Unbelievably, as the Boston Globe quotes, Secretary of State Galvin didn’t seem too bothered by it all explaining, “He can go in, but he can’t approach voters,” Galvin said. “We just took the extra precaution of telling them because this is not a usual occurrence. You don’t usually get a president doing this.”

But Brian McNiff, the assistant for the Secretary had a different take earlier in the day, according to Boston.com, “McNiff was asked if Clinton’s presence would, on its own, constitute a solicitation.

“He’s a well known person. And he’s a spouse of a candidate,” McNiff said. “That should answer the question.”

He declined to further elaborate.”

No doubt he was holding the bullhorn to warn voters of his presence at the New Bedford polling station and the law. “I must stay 150′ from you!” voters did not hear him say.

“By golly is it voting day here? Hey don’t mind me!” 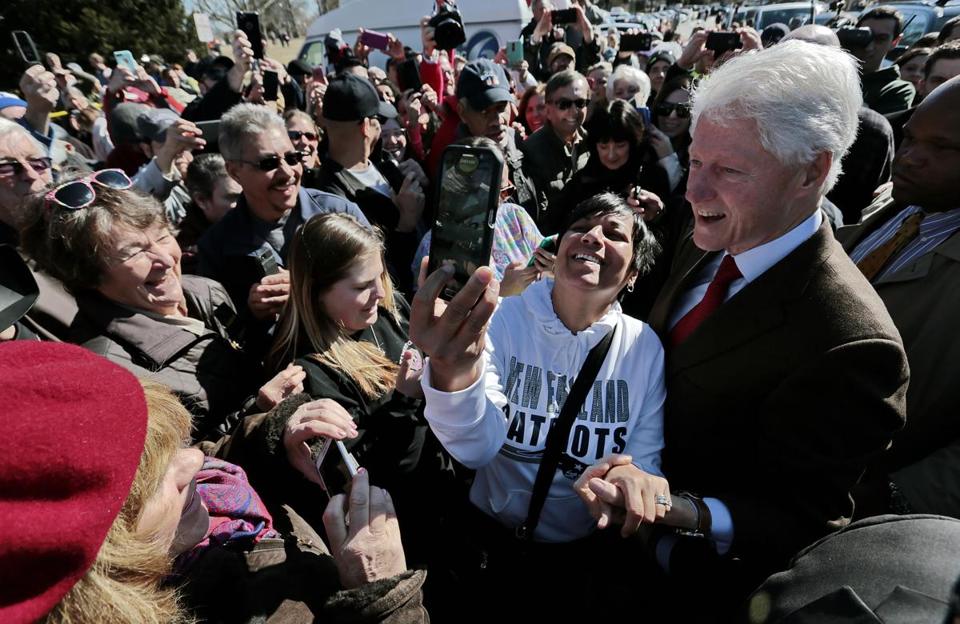 Unfortunately once Secretary Galvin made his judgment clear to the press, the press then backed off and the dismissal was no more apparent than the top-running story on Google this evening posted by CNN Politics wherein Mr. McNiff, clearly stepping back in line told CNN that “…shaking hands alone isn’t prohibited. Explicit campaigning is what’s banned within 150 feet of a polling places.

“Just meeting people doesn’t constitute campaigning,” McNiff told CNN. “We received no information that anything like that happened.”

Celebrity power to influence? No way!

His office said it reached out to the Clinton campaign Tuesday “just to remind them about the 150 foot rule.”

So long after the fact, long after Clinton and his entourage had paraded through polling places barricaded to enable him to  shake hands, kiss babies and little old ladies, coming into the polling places to thank poll workers, Clinton was kindly reminded of election law.  Just in case this beginner in the ways of electioneering might forge, we suppose.

As Galvin admitted, one doesn’t usually have the experience of a presidential candidate having a spouse that ran the country as president for two terms.  No other presidential candidate or figure has ever had a spouse that just by virtue of their presence sends a message of Democratic and presidential power like Bill Clinton, much less the typical controversy and celebrity.  No other individual, certainly not a first lady, acting in such a close relationship to a candidate has gone and “worked” the polls the way Clinton did.

The Clintons knew they would have the south in the bag, but they knew that Massachusetts, as shown the night of the election as the returns bounced back and forth between Sanders and Clinton would be a bitter fight to the end.  They also knew they had an advantage; a tag team that could make that personal appearance, jump in the ring at the last minute and put the Sanders campaign in a twist with that final deadly move.

What’s most disturbing remains the fact that despite this flagrant violation of standard election law, officials decide to turn a blind eye.  With Trump’s making his presidential pitch sound more and more like a fascist take-over by an infomercial star and now this, one has to wonder does the slide down the slope get faster from here?

The Democratic National Committee has started a petition with Change.org to demand that Clinton’s forfeit their Massachusetts delegates:

We Demand the DNC Rescind Clinton’s Massachusetts Delegates Due to Breaking the Law!