When Does Shock Value Lose its Free Speech Rights?

Traveling the wards on election day in Manchester gleaned some interesting snapshots, such as the one with Elizabeth Edwards at Ward 4; she was a great sport with the picture taking.  But aside from the usual stock of candidate’s sign holders, Ward 6, at St. Pius Catholic Church on Candia Road, had an especially peculiar election day sign holder.

Right at the entrance to the walkway was poised a woman holding a gigantic, nearly 4′ x 5′ sign in front of her.  The picture was so huge that it was visible all the way down the driveway across the large parking lot.  A gigantic graphic photo of what appeared a D and C procedure blasted the viewing space of everyone heading into the polls.

Such images represent a sort of violent assault to one’s senses.  If you notice in the picture, the woman is given wide berth by people doing their visibility obligations.  Such a graphic image is deeply unsettling.  Aside from the fact that a D&C is not a standard elective abortion procedure but used only in medical emergencies, thus such pictures are deceptive, should zealots be allowed to assault voters with such images?  What if anti-war protesters decided to jump on the wagon too and carry graphic signage of children blasted apart by bombs?  While all progressives and even libertarians hold strong anti-war positions, do they do this on a regular basis and if not why?  Imagine such a scene if you will; the polling places would begin to look like a war zone and would possibly repel voters from even making the walk to the polling place entrance. 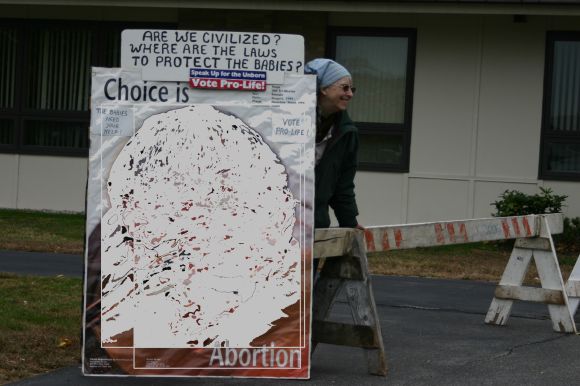 One of the two Democrats who stood holding signs said, “Yeah and whether you’re pro-life or not is such a sign necessary to prove your point; we’re all against child pornography but we don’t carry around images of the act to prove our point.”  Exactly.  The young man said that some of the people even on the Republican side occasionally walked over and tried to stand in front of the woman to at least hide her image from small children.  But the woman would have none of it and would change position accordingly.

As it is, one has to wonder how parents with small children dealt with this imagery.  Its a solid tradition in our country for parents to bring their children with them to the polling place, should voting be associated with graphic images of death, much less dead babies, which can be doubly upsetting to children?  Is this the imprint of the voting experience that we want on children’s minds?

We called the Secretary of State’s office and spoke to the Deputy Secretary of State yesterday, she said that the moderator of the polling place has a lot of leeway in deciding what is disruptive in signage or other activities.  We note that of all the polling places we visited in Manchester (barring Wards 11 and 12 which we weren’t able to get to), this was the only location that hosted this type of signage.

So the question must be asked, does this poster represent a disruption to voters that day?  At what point does “free speech” intersect with the public’s interests for not being visually assaulted? Wouldn’t a poster or sign asking voters to vote pro-life been sufficient to satisfy free speech and get the message to voters?

We offer up here a poll for our readers: