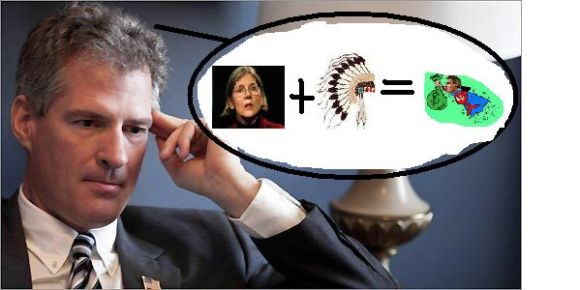 As seems par for the course, the Massachusetts Senate race between Tea Party supported Republican incumbent Scott Brown and his Democratic challenger, Elizabeth Warren, comes down to race.  As always, when one takes the time to turn their jaundiced eye in the direction of the racist whoops and hollers, what is found is a vacuous, empty shell of a candidate. Considering the fact that Elizabeth Warren scares the absolute bejeezus out of Wall Street, you’d think that Brown’s campaign might reflect the great minds that money supposedly can hire to dream up some nefarious defense of run away capitalism. But, as usual, the corporate capitalists prove that its really hard to find a way to defend a system that will screw over the very people whose support you need.

And we hate to say as usual, but yes, as usual, lacking the ability or the will (may alienate their base?) to come out with anything close to intelligent argument, the campaign resorts to race jealousy, old affirmative action scripts and of course, just plain ignorance, as mhasegawa on the blog FortLeft shows here:

Who knew that the Massachusetts race for the United States Senate – and maybe for Democratic control of the entire Senate – would come down to race?  When I wrote about this last May I thought this was a one-off remark and since it didn’t move the polls, I figured the whole thing would die.  A lot of people who are part Cherokee didn’t register for many reasons including fear of being targeted if they were open about Native American ancestry.

But now Scott Brown has made Elizabeth Warren’s race the centerpiece of  his campaign.  He has decided that the path to re-election is to question Warren’s family heritage.  He has not produced any proof that her having “checked the box” made any difference in her tenure at Harvard Law School.  On the other hand, Warren has produced people, including Republican Charles Fried, to say either they didn’t know or if they did it made no difference.  Where’s the beef, Senator Brown?

One thought on “Scott Brown Shows His Tea Party Stripes”