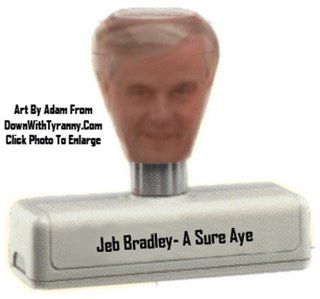 An email we received from the kind folks at Bury Northern Pass reference the moratorium bill, SB-99.   Apparently the well known, avid hiker of the White Mountains, Jeb Bradley has decided that as long as he doesn’t have to live with giant high tension power lines in his backyard and he closes his eyes while hiking, he won’t have to see the results of his handiwork.  Hey as long as you can notch off another peak and claim yourself a member of the 4,000 footer club, who cares if transmission lines spoil the mountain experience?

Because of course, getting the support of PSNH, NSTAR and Hydro-Quebec, three of the large corporate utility companies frothing at their mouths at the potential profit for Northern Pass, is more important than representing the poor little people of your state, amirite?  According to the folks at DownWithTyranny, rubber stamping corporate agendas at the behest of the people’s interests and just generally being a corporate whore is nothing new to ‘ole Jeb.

SOMETHING’S ROTTEN IN CONCORD – A TRILOGY
POLITICS IN NEW HAMPSHIRE SINKS TO A NEW LOW! – PART ONE
by
The Alliance against Northern Pass

CRONYISM REARS ITS UGLY HEAD –This past Wednesday, March 20th at the State House in Concord, honest, transparent  governance, what New Hampshire used to be famous for, took a back seat to cronyism.  Jeb Bradley, a member of the Senate Energy Committee considering Senate Bill 99 slipped a decidedly underhanded maneuver past the public and his fellow senators on the Committee using questionable, disrespectful parliamentary procedures.   In doing so, Bradley ignored the wishes of tens of thousands of Granite State citizens who wanted SB 99 passed in order to implement a one year moratorium to slow down the current breakneck pace of approving huge elective energy projects like Northern Pass and the proliferation of gigantic wind turbine fields.  The moratorium, if passed, was designed to give our state’s regulators the time and resources needed to properly vet these projects.  Our state needs to be sure that ALL optional energy projects, not needed to keep the lights on, truly provide a net benefit to New Hampshire’s businesses and residents, not just the energy companies’ stockholders, before they are given a green light by the state’s regulators.

WHAT’S AT STAKE? –It’s our state government’s obligation to make sure that the unblemished character of our state, especially north of Concord, so critical to our tourism based economy, is protected from an unsightly proliferation of wind turbines, power towers and cables that, once erected, will wreak havoc with the reasons why tens of millions of people come to visit our lakes, hills, rivers, mountains, and forests every year.  Tourism and its many components make up our state’s largest single industry.  Why mess up the beds we sleep in by destroying the magical nature of our surroundings that stimulate people to come here year after year after year?  The notion of messing up our landscapes with projects like Northern Pass for no net benefit to our state is tantamount to sheer, utter lunacy.
THE “FIX” WAS IN –One purpose of this news release is to make as many people in New Hampshire as possible, aware of how certain politicians in Concord are doing business, but this article is also meant to reach the Committee that heard Senate Bill 99 this past Wednesday.  Another objective is to call attention to the actions of one individual on that Committee, Senator Jeb Bradley, who was the person primarily responsible for the shameful performance that went on in Room 103 under the guise of being a so-called Committee Hearing.  Apologies in advance to the rest of the SB 99 Committee members who were hopefully not complicit in the pre-planned deceit and subterfuge that was inflicted on those members of the public who drove many miles, perhaps hundreds of miles in some cases, to attend a hearing where there was no intention by Bradley from the outset to pay any attention to what the voters had to say because “the FIX” was in before the meeting ever started.
(Part Two of the Three Part Trilogy Coming Soon)
FOOTNOTE – The title to this trilogy, SOMETHING’S ROTTEN IN CONCORD, is a phrase lifted from Shakespeare’s, “Hamlet” in which Marcellus says, “Something’s rotten in the state of Denmark.” In modern days, the phrase has come to mean “things are unsatisfactory; there is something fundamentally wrong.”