…and speaking of Libertarians and other local nutjobs…

Susanthebruce has noted the odd ruminations and actions of some of the Free Staters and wing-nut/tea bagger factions on the right this week.  First, there’s JR Hoell, state representative, Republican, of Hudson who as we have it on the downlow, actually had to fight for his seat this last session because some determined progressives decided to give him a run for his money. And now we show you one example of why progressives shouldn’t let up but instead fight relentlessly to unseat people like Hoell:

Hoell calls himself NH_Braveheart.  Yes, you read it right.  The guy who one session famously put forward a piece of legislation that still had the watermark from the infamous one size fits all states bill-mill, ALEC.  Hoell was too clueless to at least remove the ALEC marking before introducing legislation and pretending that he originated it out of his own head.

Hoell, who comforted the grieving families and community-members after the tragic Newtown Connecticut shooting by repeating shallow PR lines from the NRA and thus placing blame on the victims and minimizing the tragedy.

Hoell, who looking like the ass he apparently is willing to be for the gun lobby, said the right-wing darling, Scott Brown was not actually right-wing enough and he’d incite an “armed rebellion” if Scott were elected to the New Hampshire senate.  Scott was of course defeated to relief of everyone, despite the opportunity many saw to put Hoell out of his misery once and for all. 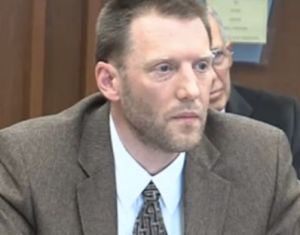 JR Hoell. Imagine this man with a gun.

Hoell, who bragged of his practice of registering domain names using the names of state politicians or even those seeking office.  At least one state rep candidate in 2014 has complained to the secretary of state’s office about this practice and how it was used as a means to harass and slander her by publishing misleading or downright lies about her on a page dressed up to appear as her campaign page.  No charges were filed.

Hoell, who introduced legislation attempting to ban state enforcement of federal firearms regulations (constitutionally impossible) that was proposed by another outside organization.

Hoell who, out of concern for the “excessive paperwork” of some companies, proposed with another state legislator, to ban employee lunch breaks across the board in New Hampshire.  Let’s say that again in case you didn’t get it the first time:

They proposed to remove the requirement of work places to allow for at least a half-hour lunch break when an employee works seven hours or more (as the law now requires in NH).  Hoell and his twenty-year old legislative cohort didn’t have an opinion on the required fifteen-minute break after four hours, but we’d assume they’d see that as an unnecessary burden to companies as well.

Hoell, who works hard to restrict a woman’s right to choose, including participating in and supporting pro-life groups at every opportunity, even supporting the supreme court attack on the buffer zone law meant to keep religious zealots from harassing patients entering or leaving women’s health clinics (which for the majority of care do not perform abortions, but the zealots don’t care; a harlot is a harlot to them).