British Unions Shut Down London With Strikes – Over 700,000 March 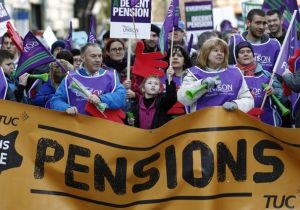 Nearly 800,000 union workers in Britain converged in London on yesterday to demand that the government end its austerity measures.  Similar to other unrest in Spain, Portugal and Greece and across the Atlantic in the US last year, Britian’s workers demand an end to the distribution re arrangement policies dubbed “austerity measures” by the press and politicians.

In favor of the conglomeration of capital among elite global finance and banking interests worldwide, government worldwide have proposed cutting public social safety nets.  The obvious effort to turn the world’s workers into pools of low-wage labor has met with resistance across America and Europe and now Brit workers take their turn to be heard.  In the rally labor leaders call for a general strike.  In addition, as Real News reports, London and other EU countries have November 14th in their sights for a continent wide day of action against austerity.

The Real News has posted a video and report: