Just on Counterpunch: leaked parts of one of Hillary Clinton’s speeches in 2013 before investment firm Goldman-Sachs, a brilliant read and while obvious satire, the sad truth is that the writer doesn’t veer too far from the reality of the neo-liberal agenda/mindset.  The mind-set that brought us the bizarre concept that in order to capture voter share Democrats should abandon the New Deal, fair trade, environmental and labor protection and veer off into the land of imperialist capitalism. 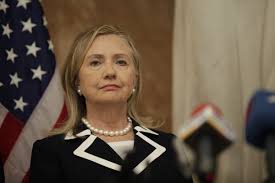 CLINTON: Thank you. Thank you so much. Thank you very much, Lloyd [Blankfein], and thanks to everyone at Goldman Sachs for welcoming me today. I’m delighted to be back among friends, colleagues, collaborators, supporters, kindred spirits…

Let me jump right in. You know, over the past few months, there have been popular concerns about an economy that still isn’t delivering for the majority of Americans. It’s not “delivering” the way that they feel it should, that they feel entitled to. Most Americans that you speak to, speak a populist rhetoric that claims it is stacked for those at the top, that those of you here have it too good.

Read the rest at Counterpunch