“THANK YOU, BROTHERS AND sisters. My purpose in being here today is to dedicate this mural, and before I do that, I want to say a few words about culture in the labor movement.

In 1913, a young journalist by the name of John Reed visited Paterson, N.J. during the historic silk workers’ strike. He wrote an article for a magazine, and said: “There’s a war going on in Paterson, but it’s a strange war. The violence all comes from one side and it’s directed against the workers.”

He learned about how these workers had forged solidarity, and a unity, that enabled them to shut down Paterson, N.J., to shut down the silk industry there in a great struggle against speed-up and for basic human dignity.

In the midst of that historic struggle, Reed went to his artist friends in Greenwich Village, enlisted them in the struggle, and together with the workers, they organized a great pageant, which was a popular art form at the time.

The workers marched in off the street and onto the stage where they re-enacted the different episodes of their historic strike, and the actual strike leaders, people like Elizabeth Gurley Flynn and “Big Bill” Haywood, gave speeches they had actually given during the course of the strike. The workers led the audience in the singing of their strike songs.

The audience became the performers; the performers became the audience. It was the greatest pageant that had ever taken place in U.S. history. It pretty much destroyed pageantry as an elitist art form from that time on, because it told the stories of the workers.

What could be more dramatic than when oil workers shut down a country, as they have done in Nigeria, and lead a general strike that challenges the very foundations of power in an important African nation? That’s genuine drama, not what we’re fed on TV. It would be a good special to have — oil workers in a Nigerian strike on an HBO special.

Just as the workers in Nigeria realize that they produce the wealth (workers in this country are beginning to realize it too), they also produce ideas of culture. The Wobblies, as IWW members called themselves, understood that very well. Their cultural work was inseparable from their political activity of organizing. So they wrote song parodies, they cartooned. Before they went to jail, they would each learn different poems so they could recite them to each other while they were in jail.

Any living labor movement immediately turns to art and culture to inspire its members and those it wishes to win over. That has always been the tradition of the American labor movement. It was a tradition of the sit-down strikers who organized orchestras to serenade their members when they were inside the plant, and then transformed them into brass bands to march around cities when they had won their strikes. These same workers conducted theatre and wrote poetry.

That’s what our little project — the Labor Art Mural Project (LAMP) — is trying to do. We’re attempting to resurrect these traditions. It comes from our experience painting murals with P-9 strikers who waged a bitter strike against the Hormel Meatpacking Co., and with Pittston miners, painting on their walls and writing songs in the struggle against the mine owners.

Cultural work is one of the traditions that has to be relearned, just like many of the other traditions in the labor movement that have gotten somewhat rusty:

In 1994, just as in 1913, there’s a one-sided war going on, and if these traditions are not put back into practice, and if they’re not relearned, then, as President Wages pointed out this morning, the labor movement will perish.

It’s been a privilege for me to sit here listening to some of your initial plans. I believe OCAW is attempting to ensure that the labor movement does not die, and in doing that, you’ve taken on a responsibility that goes beyond your own members and speaks to the hearts and minds of all workers — workers in other unions, workers who are unorganized, and workers who are just arriving in this country.

I believe this is most clearly expressed in your promotion of Labor Party Advocates, in the idea that workers are entitled to an independent voice in politics, just as they are entitled to an independent voice in culture. So here, I must put on my LPA cap on top of my artist’s beret and take this opportunity to thank Tony Mazzocchi, who, I believe, has earned a special place in the labor movement. It is not an accident that the clearest voice over the past years in advocating the formation of a labor party is also in the forefront of promoting cultural activities for the labor movement.

The next project of LAMP will be a mural project with mushroom pickers in Eastern Pennsylvania. These workers have self-organized themselves into a union much as CIO workers did decades ago, much as drywall strikers recently did in Southern California.

And with that in mind, and with the tasks’ that you have outlined in mind, it’s a privilege and honor to dedicate this mural to Karen Silkwood.

Karen Silkwood was a great heroine. Not because she was murdered – the atomic industry has murdered many people. It’s not an industry known for it’s respect of the sanctity of life. This is an industry that conducted tests on retarded children, that gave them irradiated milk and told them they were members of a science club. They’ve murdered many.

It wasn’t dying that made Karen Silkwood great, it was how she lived that made her important for us and for the rest of labor. She made a conscious decision to place the interests of humanity and of her fellow workers above the interests of her job, and as some of your officers have pointed out at this convention, that is something that the workers alone can decide to do. No politician, no union official can change the world today; only workers can do that. That was expressed, I thought, very well by all of the artists in the presentation this morning.

So I dedicate this mural to Karen Silkwood because she showed us how to live and how to extend solidarity in real life by building her union.

They can’t kill our movement’

I present this mural to you, the elected delegates of the Oil, Chemical and Atomic Workers Union, who represent the great rank and file of this union and those who, in the future, you will organize into its ranks.

Thank you for allowing me to be a small part of that process, to say these few words, and good luck on your convention. ■

Mike Alewitz directs the Labor Art and Mural Project (LAMP) at Rutgers Labor Education Center where he is Artist-in-Residence for the New Jersey Industrial Union Council. He is a well-known artist painting in the magic-realist tradition, and has organized and executed projects for the United Mine Workers, United Auto Workers and many other unions.”

Click Here for the History of the OCAW Mural 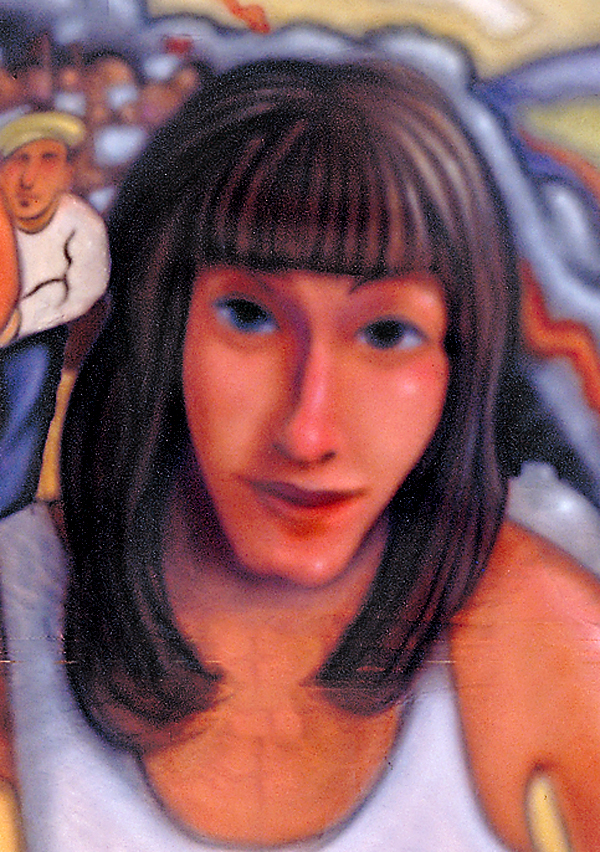 For more of Mike Alewitz’s work: check out his homepage, alewitz.com

One thought on “Dedication Speech for Mural of Karen Silkwood: Mike Alewitz, 1994”