Grafton Voters Speak – No Wind Farms and No to Free Staters 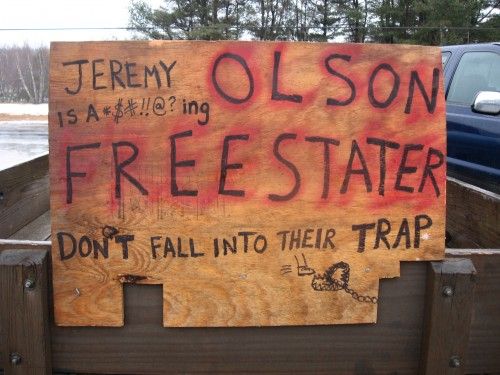 The Free Staters no doubt are running for the proverbial Tylenol as they suffer their after-party hangover. Voters in Grafton sent a clear message to the Free Staters that their anti-government anarchism is not welcome or wanted.  As reported on Wednesday, March 13th (yesterday) in the Valley News, voters in the town of Grafton roundly rejected the Free Stater attempt to take over their town by slashing their budget by 13%.

At the town deliberative session the spending cuts passed by only one vote (33-32).  Those who watch the Free Staters and their antics may recall how the Free State Project adherents did everything short of dance in the streets and declare their colonization of New Hampshire near complete over this vote.  Of course the natives took note and took up their ballot pens in defense of the town and culture they have built.

In other votes the town voted down the Wild Meadow Wind Farm proposed by Iberdrola, a wind turbine company out of Spain.  Although this won’t stop the process of wind turbine approval, which is far more complex (involving the SEC), the town’s voters used the ballot box to express their lack of support for turbines on their highly prized ridgelines. The vote tallied 160 for the wind turbines against 366 opposed.  This vote also sent a message that the town of Grafton questions the SEC approval process as it stands at this time.

For more information on the Wild Meadow Wind Farm proposal and its argument against the value of wind power generation in New Hampshire.  We encourage all people to study wind energy generation, its return for energy consumed, the negligible to zero effect on reducing greenhouse gas production and most importantly and the environmental costs that result from the infrastructure development required for wind turbine placement.