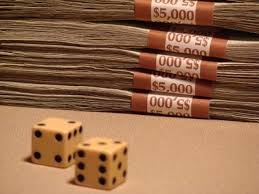 Is the game rigged?

No matter where we look these days, we find an obsession with debt and the deficit. We hear on a daily basis that the deficit will ruin our economy, turn us into Greece and drown our grandchildren in crushing debt. How true is this understanding?

I am not an economist but I was founder and C.E.O. of a successful corporation for over 25 years. From a business point of view, debt is merely an obligation or liability to pay or render something to someone else. A problem emerges when investors lose faith in the debtor’s ability to repay the obligation. A company, similar to a country, sells bonds to provide working capital. Contrary to popular belief, it is not a bad thing for Chinese or European investors to buy U.S Treasury bonds. It demonstrates confidence in our nation’s economy.

Furthermore, the country’s wealthiest 2% tell us that any day now investors will lose faith in America’s ability to pay its bills. They warn of a run on Treasury bonds similar to what happened in Greece and see inflation skyrocketing. These scare tactics fail to recognize that the United States is not Greece and we have many safeguards in place since the Depression of the 1930’s. In addition, we overcame the Great Recession of 2008-9 thanks to a strong Federal Reserve, a competent President and a Congress that actually did its job.

Unlike Greece, we have our own currency and all of our debt, both public and private, is denominated in dollars. These dollars are not backed by gold but the full faith and credit of the Federal Government. Theoretically, our government can never run out of money because currency is physically manufactured on an hourly basis. Most citizens are unaware that currency printing began in 1861 to fund the Civil War and has always kept our economy solvent. This fact of life often leads to the following question: “If the government prints money to pay its bills won’t that lessen the value of the dollar and lead to runaway inflation?”

Economists tell us that when the government prints more money, investors may start to expect higher inflation down the road and this may push down the value of the dollar.
However, if these results do take place that would actually help rather than hurt the U.S. economy, right now. The fear of higher inflation would discourage corporations and families from sitting on cash, while a weaker dollar would make exports more competitive.

Generally speaking, our deficit is the result of higher spending and reduced tax revenue, caused primarily by a drop in personal income and the cost of two wars and necessary social programs. It is ironic that the scare-mongers of the debt menace are the very people who have benefited the most from our existing economic system.