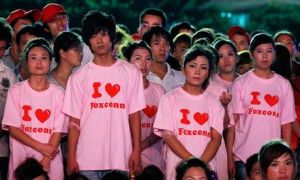 From the Guardian: Foxconn workers at a rally in the southern Chinese township of Longhau following a series of suicides among employees in 2010. Photograph: Bobby Yip/Reuters

In yet another exposure of the abuses of labor by Chinese plants owned by Taiwanese FoxConn company, this time in the use of students as young as fourteen duped into an ‘intern’ program.  Apparently the company had partnered with schools to provide child labor to the plants disguised as ‘interns’ but who were in fact laboring to produce widely popular Ipod products.

This proves once again that with the uncontrolled capitalist the past has no lessons to teach it, that the ethical barriers of humanity come crashing down in the face of profit.

Taiwan‘s Foxconn, the world’s largest contract electronics maker, has admitted using student interns as young as 14 in a Chinese factory.

The case is in breach of national law and raises further questions about its intern programme.

Employment rights activists in China have accused Foxconn and other big employers in the country of using young student interns as a cheap source of labour for production lines, where it is difficult to attract adult workers to lower-paid jobs.

Foxconn, the trading name of Taiwan’s Hon Hai Precision Industry, said it had found that some interns at a factory in Yantai, in the north-eastern Shandong province, were under the legal working age of 16. It did not say how many were underage.

“Our investigation has shown that the interns in question, who ranged in age from 14 to 16, had worked in that campus for approximately three weeks,” the company said.

Read the rest of the story in The Guardian.