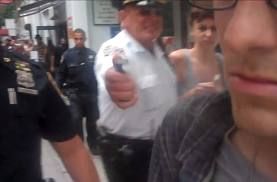 In the Raw Story report about the Crown Heights police brutality issue, a video is embedded below the story that discloses a series of questionable police practices throughout the country.

Exposed in these videos are a series of obvious police abuses of power throughout the country.  A police frisking of news crews, police frisking and holding of two African-American men who are detained and threatened by police who state they will “make stuff up” to put the two arrestees at fault:

Another case of outrageous abuse involving an arrestee in Pennsylvannia, Robert Leone who is still as far as we know, serving time for crimes that seem overwhelmingly fabricated by a state police department and many actors, including the treating hospital and the Pennsylvannia jail system in participating in covering up the outrageously cruel actions of the officers involved in brutally beating Robert Leone:

More information is disclosed here on on a blog hosted by Amy Browne. Unfortunately the Facebook page for Robert Leone does not show up on a search and the link goes to nowhere.  But, the videos contained here also link to many other videos of police misconduct throughout the country. Updates to Robert’s Leone’s story will be posted when we can find them.

There is no doubt that the proliferation of small, portable video recording technology has increased the exposure of police misconduct.  The exposure of the historic Rodney King beating at first led to an all-white jury acquitting all officers involved in Rodney King’s horrific beat-down.  Not until the people in L.A.’s African American community used the only force they had in response — angry rioting, did the greater community demand justice for what many still wish to believe was an isolated and rare instance of police brutality.

But as technology increasingly improves and no longer does one need to hope for the presence of someone with a hulking video camera to be present at the scene, illegal police activity hits the spotlight ever more frequently.  In an era of increased paranoia, fed by a government intent on justifying police repression, people seem all too anxious to pick up the phone and report ‘suspicious’ behavior, all too often arising from assumptions based on long-held social prejudices.

While this site cannot possibly spend the time highlighting all instances of police brutality (and many sites exist that do that — which we will link to as we find them), we will attempt to draw attention to this issue and its larger social ramifications.

Especially important to note is the increased militarization of local police forces in the name of the ‘drug war’ when in fact proof exists time and time again that tanks, high powered assault weaponry and battering rams often are excessive, unnecessary and provoke police departments to act more like small guerilla armies than protectors of the law.  The implications of this trend are disturbing, when put up against the ease with which law enforcement officers cross the line of humane justice and into the realm of fascist enforcers of control and suppression. This is issue that should concern every citizen in this country.

Many progressives in New Hampshire have expressed concern that the efforts of some groups, particularly Cop Block in Manchester, NH and their libertarian supporters, draws attention from the real issues of police brutality in a misguided effort to create instances of police brutality by unnecessary escalation and provocation.  There exist enough cases of police over-use of authority that purposeful martyrdom not only trivializes real abuse cases, but draws attention from the broader, more important issues of racism, socio-economic stratification and increasing public xenophobia fed by the military-industrial complex and the media.