Teacher’s Unions are Like All Teh Stoopid and Who Needs Educashun Anyway?

When you post on Facebook, a blog or any other public forum, you throw out your thoughts to the public, open for debate and discussion where ever it leads.  Based on the idea that you are the baddest ass in town and you got New Ideas that everyone should know, you post a comment.
So, when someone like myself comes and stumbles upon a killer of a post, hey why not capture that and repeat it right.  What an idea.  Maybe even some feedback might be come forth in the form of some blogger who just kind of likes to set things straight and can’t believe it when they hit upon something as good as this:

I should have become a teacher instead of a millwright…Average pay of $76,000 a year for working 40 hours a week 9 months out of the year and my union demands that I strike because a 16% pay raise (to $88k a year) over 4 years plus sterling silver retirement benefits isn’t enough…I make about a $100k a year now but I work 3000 hours a year for it and my pay IS dependent on the successful performance of my job…quite unlike the collective bargaining agreement for the Chicago teachers union.

Yes, even though this Millwright is a union millwright, posting on a Union Millwright page.  So we can presume that unless he pulled himself by his bootstraps for the last 100 years, the union had something to do with his pay.Last I knew all unions use collective bargaining, no?  According to this here report straight from the horse’s mouth, Millwrights have unions that exercise collective bargaining too!
Contrary to popular myth as well, usually said about all unions, union teachers are all just as duty bound to perform their job to standards agreed upon or they are out.  Evidenced though by this person’s thought processes, I would suggest that we reduce class size, stop allowing wingnuts to screen public school textbooks,  get back to teaching science instead of superstition and earn a living wage that is commensurate with where they live and most importantly what they do.

The Chicago teacher’s union currently in the headlines and, in my opinion every single other worker’s union comprised of those who work for the government, are not legitimate unions…They should receive no support whatsoever and, in fact, should be despised, derided, refuted, shot down, and ridiculed by our respective Millwright unions…

Yes, teachers, a part of that ugly liberal cabal we know as education! Our wonderful union man even suggests shooting them down.  Wow.  And he wants his Millwright brothers to get out there and show the rest of the brotherhood how its done.  Because apparently, if you don’t need an education to make nearly $100k a year, why the hell should anyone else have one?

How many of you enjoy reading in the headlines about how the ‘Teacher’s Union and unions in general are killing America’?

Yup and its all because of teacher’s unions.  Unable to grasp the larger goal of the theme presented there; that this union is bad so that means all unions are bad, he goes for the bait and decides he’s different and he’d better join forces with the anti-union crowd and stop out all those fake unions.  Because his taxes pay his wages.  Isn’t that rich?  This is a guy whose major forms of work are public works projects or public/private partnerships, highly regulated and yes, highly needed by that particular industry at the particular time that Millwrights come in and do their work.
See this deserves pointing out since our union man can’t seem to understand that nuclear plants, gas plants, refineries all get a lot of tax dollars. Yeah, our dollars. So I guess that means that me and a bunch of teachers should come in and tell him what his stupid Millwright job is worth.
Unfortunately, you’d half to have a brain enough to think far enough and understand that there’s a similar relationship between teachers and democracy.  Highly needed for that machine to work, so you’d think they’d be highly valued and thus highly paid.  Nope.  Unlike deep thinkers like union man, who seemed to have drowned in the shallow puddle that is their mind, local governments decide teacher salaries and local governments are usually headed up by people who aren’t teachers.
NO FUCKING WAY!
Believe it, I’m telling you.  They for city offices like city counsel or alderman, or school board that are for the most part, open public sessions.
NO FUCKING WAY!
And in fact, in those cities and towns, the people can get up, get in the streets and protest that teachers are just big mooching union thugs who should be paid like the teenager who last gave you your burger order. In fact it seems like the last couple years, your people have been at it already : 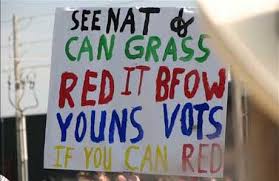 Of course we see evidence of towns where all the sensible people are running the school board or city council all the time.  Which proves as always that no one needs teachers and school is just a big waste of time. 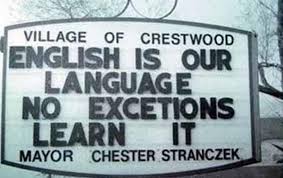 The Teacher’s unions and other unions of government workers are giving the real unions in America a black eye and a bad name…Legitimate unions work for businesses and and corporations and bargain for a fair share of the profits that company makes. Unions of teachers and other government workers have no such concern, all of their money comes out of OUR pockets in the form of taxes…

Because his taxes pay their wages.  Isn’t that rich?  This is a guy whose major forms of work are public works projects or public/private partnerships, highly regulated and yes, highly needed by that particular industry and probably the public sector at the particular time that Millwrights come in and do their work.
See this deserves pointing out since our union man can’t seem to understand that nuclear plants, gas plants, refineries all get a lot of tax dollars. Yeah, our dollars. So I guess that means that me and a bunch of teachers should come in and tell him what his stupid Millwright job is worth.

This is not how it should be…compensation as well as as reforms on hiring and firing should be decided by the public who pay their salaries NOT by renegade unions who can strike and extort more and more power and money from those who pay their salaries. If we want better teachers to school our children it should be OUR decision and we should vote on it, not the result of an act of extortion holding the education of our children hostage…

At least not held hostage by the publicly elected school boards and city government, no way, they have their hands completely tied.  Since apparently the Millwright’s union at some point got someone’s hands tied at their industry and now they’re sucking out $100k wages!  The injustice!  Why, I’m sure that with a little on-the-job training, I could build a turbine and repair it and get a second job at Wal-Mart to boot if I want some luxury like paying my light bill.

I would ask of each of you in your next union meeting to call for a vote for condemning the teacher’s union strike and for issuing a public statement that your union does not support in any way the current strike in Chicago…It will probably get shot down but what the hell..

Yes, it will probably get shot down, just the way it is on that page, because thankfully there’s some union members who got a decent education from a union paid teacher.

3 thoughts on “Teacher’s Unions are Like All Teh Stoopid and Who Needs Educashun Anyway?”