Excellent article from The Onion on Gorilla Violence and the related debate about controlling gorilla ownership across the country. 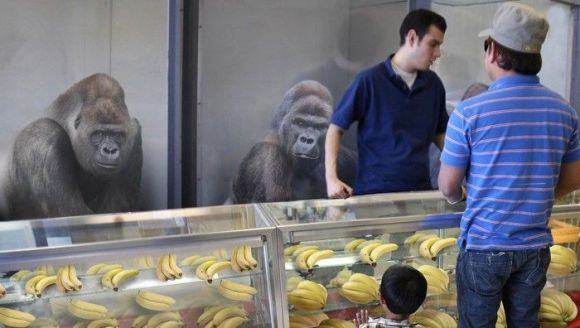 SAN DIEGO—Following the events of last week, in which a crazed western lowland gorilla ruthlessly murdered 21 people in a local shopping plaza after escaping from the San Diego Zoo, sources across the country confirmed Thursday that national gorilla sales have since skyrocketed.

“After seeing yet another deranged gorilla just burst into a public place and start killing people, I decided I need to make sure something like that never happens to me,” said 34-year-old Atlanta resident Nick Keller, shortly after purchasing a 350-pound mountain gorilla from his local gorilla store. “It just gives me peace of mind knowing that if I’m ever in that situation, I won’t have to just watch helplessly as my torso is ripped in half and my face is chewed off. I’ll be able to use my gorilla to defend myself.”

“Law enforcement and animal control can only get there so quickly,” Keller added. “And you never know when you’ll need to use a gorilla to save your life.”

Reports confirmed that gorilla sales have historically risen sharply in the immediate aftermath of a major gorilla attack, most notably after the 2010 tragedy in the small town of Logan, NM, where 14 people, including two 5-year-old children and a 92-year-old woman, were viciously beaten to death by a 12-year-old gorilla who spontaneously attacked patrons of a crowded grocery store.

The latest attack marked the fifth of its kind in the United States within the last six months and has reignited the explosive national debate over gorilla control, with thousands of outraged Americans reportedly demanding that their government representatives act immediately in order to prevent further bloodshed.

“We’ve had to deal with too many gorilla-related tragedies, and we’ve had to bury too many innocent, feces-covered victims,” said Nicole Simmons, president of the Mothers Against Gorillas coalition, who herself lost her 16-year-old son in the infamous Baker High School gorilla rampage of 1997. “It’s time to put an end to this. We need to get gorillas off the streets once and for all. Enough is enough.”

“The answer to this systemic problem is not more gorillas,” Simmons continued, her eyes welling with tears. “The answer is fewer gorillas.”

As evidence, Simmons pointed to a 2011 University of Maryland study, which found that 98 percent of Americans who own a gorilla have never used them for defense against a home invasion. Simmons also cited widely reported studies confirming that people who keep gorillas in the home are 12 times more likely to have their arms torn off, and children in those households are 19 times more likely to be picked up by the legs and bashed repeatedly into the ground.

Furthermore, many gorilla control advocates have reportedly called for statewide limits to the number of gorillas one can purchase and a federal ban on the ownership of silverbacks, referencing as an example the tight gorilla laws in countries such as Japan, England, and Australia, where the annual rate of gorilla crimes is virtually nonexistent.

“There is absolutely no reason—not for hunting, protection, or otherwise—that an ordinary citizen would need to possess a 600-pound silverback,” said Sen. Robert Menendez (D-NJ), one of the most outspoken gorilla control advocates in Congress. “The general public frankly has no business owning apes of this size, and the only people who do are zookeepers who are trained to properly handle them. Otherwise, they are nothing but a threat to society and only serve to perpetuate more violence.”

Opponents to gorilla control legislation, however, appear to be fervent in their defense of their gorilla possession rights. A spokesperson for the powerful yet controversial national gorilla lobby told reporters that a ban on gorillas would not end incidents such as that in San Diego, as those who want the large primates could simply buy them from illegal dealers who smuggle them into the country from the jungles of sub-Saharan Africa.

Many gorilla owners also told sources that the creatures are primarily used for legal hunting purposes and that the overwhelming majority of gorilla enthusiasts are completely responsible with their apes.

“Listen, it’s my God-given right as an American to have the freedom to own a gorilla to protect myself and my family,” said Nashua, NH resident James Harrington, 46, adding that he personally owns 12 different gorillas of various sizes, but keeps them “safely locked away in [his] home.” “And the government has another thing coming if they think they can come into my house and take away my gorillas.”

“What happened in San Diego was horrible, but that doesn’t mean all gorillas are bad,” Harrington added. “In fact, if every person at that mall had a gorilla, then the tragedy probably never would have even happened in the first place.”

At press time, following the increase in national gorilla sales, four isolated gorilla attacks had just been reported across the country, with the overall civilian death toll currently estimated at 37.